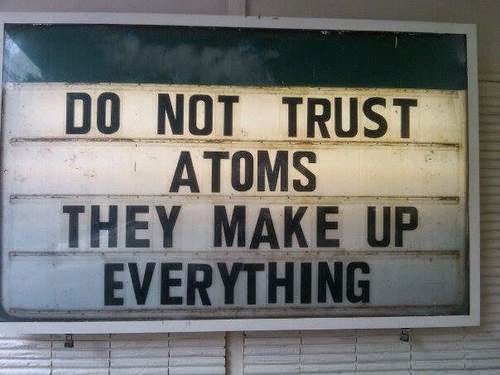 Let's talk about some mind-boggeling numbers.

There are about one-hundred trillion (100,000,000,000,000) individual lifeforms, or cells, that compose your body. Each one of those hundred-trillion cells is composed of more than twenty-three trillion (23,000,000,000,000) individual molecules. Ninety-nine percent of those twenty-three trillion molecules are water (H2O) molecules, and water ions (H3O+ and OH-). All the molecules within the cell are, to follow this reductionistic pattern deeper, likewise composed of around one-hundred trillion individual atoms. It appears that the number of building blocks that our cells need is near identical to the number of building blocks we need.

A hundred-trillion atoms are combined together in various ways to create twenty-three trillion molecules that bring the individual cell to life. The cell, being the most simplistic entity that we can call “alive”, is then brought together with a hundred-trillion other basic units of life much like it to create you. This is all done to the beat of an extensively laid-out blueprint of which we are only beginning to appreciate properly.

Now, ponder for a moment the other one percent of the molecules in your body that aren’t water. The regular slogan goes “Humans are seventy percent water” because water, being much smaller and lighter than much of the other molecules, only accounts for seventy percent of the mass of each cell, and therefore around seventy percent of your bodyweight. Looking exclusively at the total number of molecules rather than how much each one weighs, you’re only made of about one percent non-water stuff. Most of this other material is built around our parent molecule: Carbon.

You see, the atom world is filled with a bunch of bipolar people. Some atoms are very projective, and some are very receptive. Through interaction with other atoms, however, the degree of just how manic or depressive each atom is can be reduced. Electrons are the currency with which this transaction occurs. When an atom finds a way to feel eight electrons filling its outermost layer, its bipolar disorder is reduced significantly. It feels secure, and stable. This is called the Octet Rule.

Carbon is the basis of every living thing you’ve ever seen in your life, and this is because of just how badass it is by nature. Carbon has four electrons in its outermost orbital, so it wants four more to feel secure and stable. Carbon’s a hell of a dude, and gets along really well with a wide variety of other atoms out there. One of the most crucial aspects of carbon’s great ability to create lasting bonds with those around it is the way he compromises in an engagement with others. If there isn’t the necessary space to accommodate a bond, then Carbon will readily find a happy medium hybridized structure to reduce the stress of his guests being too close together.

Carbon likes to keep around four friends. Just four. Five is too much to hold on to for a constitution like Carbon has, and three just isn’t enough to feel secure. Most often two or more of these friends are literally identical people; Carbon roles deep. Hell, many Carbon’s just retire to a life of being linked to two long-term Carbon buddies in a body-fat molecule with a couple of lil Hydrogens as pets, just to keep them feeling stable without all the hubbub of metabolic cellular city life.

When all four of these bonds are made, meaning Carbon’s four electrons are now being shared with four other electrons from his buddies to complete the Octet he’s looking for, a particular shape is made. You see, everybody has their personal bubble, and when people become roommates it’s important that certain boundaries are established. In this case, each one of Carbon’s four buddies prefers to be 120 degrees away from everyone else. This maximizes their space and keeps everything copacetic. This repulsion from one-another drives all of Carbon’s friends into the four corners of a tetrahedron; a pyramid, with Carbon chillin in the dead center.

So, of the two-hundred thirty billion (230,000,000,000 or 1% of 23-trillion) molecules in your cell that aren’t water, most of them are built around some kind of Carbon-based structure, and this structure is that of a tetrahedron linked to a tetrahedron linked to a tetrahedron billions and billions of times. The functional parts of your cells are made up of a bunch of stuff that’s all built around hundreds of billions of tetrahedrons. Excepts are often made, double bonds are all over the place for example, but at the end of the day the molecules within the cell are built around the energetic structure of a pyramid, and this is taking place in the medium of water.

There are trillions of interlocked tetrahedrons composing 230-billion molecules that are floating around in 22-trillion molecules of water composing one, singular cell. Now, multiply all that by 100-trillion, the number of cells that compose the body we identify with as “I”.

Life’s such a miracle.

live.in.freedom
Posted by Unknown at 7:35 AM