Return of the Garden of Eden 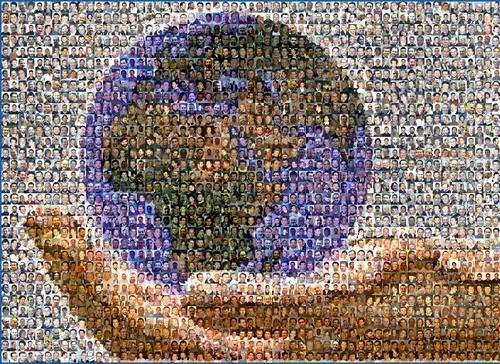 At this point I'm confident that this world will one day heal. I was skeptical about it for a while, thinking at one point that humanity would, for sure, destroy everything on this planet in our ignorant desire to dominate one-another. However, I've seen enough to make me lean the optimist's way despite all of the nasty things happening around the world. You see, the greatest thing that could happen to humanity is to be malcontent, to be angry, to be indignant, because it is only through the experience of these feelings that we can be properly motivated to actually change things. Judging by the volume of such emotions I perceive in the world around me, I sense that there is ample motivation, and therefore there is ample hope. There is one fundamental stumbling block that I'd like to address, though.


I fear that we are too wrapped up in concepts of division. Our culture, it seems to me anyway, is almost entirely based on inventing new ways to separate oneself and further the divide. There's Democrats and Republicans. There's Conspiracy Theorists and Sheeple. There's Pro-This and Anti-That. Our media propagates this type of mindset by romanticizing ignorance, judgmental attitudes, and meaningless interpersonal conflict.

The use of these divisional terms and thoughts has been encouraged through many subtle cultural shifts towards the propagated concept of "individuality". This desire to be our own person with such a specified list of love/hate relationships in so many different facets of our lives drives us towards the self-defeating concept that there are only a few people around us worthy of our love and tolerance. By individualizing ourselves, en masse, to such an extreme degree we have diminished our intellectual ability to relate to other people on a heightened level, because we're all so focused on how different we are.

One must understand that individuality is a powerful double-edged sword, because when one speaks the word, "individuality", one is also addressing the fundamental principle and paradox of duality. The problem with seeking an unhealthy level of individuality is that in doing so you strengthen your decent into duality. This causes a feeling of separation to pervade one's thoughts much more. Thoughts like, "They wouldn't understand", "They don't know what I'm going through", and, "Nobody can know about this", are clear signs that you are experiencing an intense fall into duality, because it is the content to which those previous statements refer that is in fact what defines the most fundamental aspects of who, in fact, you really are. One must understand that this level of individuality is not as superficial as our choice in aesthetic style or something like that, because things like that are rather arbitrary and change often, and are usually entirely acceptable parts of ourselves that we deem safe to share with the world around us. The level of individuality I'm addressing houses and nurtures your secrets. These are the things you don't ever let anyone know about. These are the thoughts you bury so deep inside you that you likely never even let yourself think about them.

We all have these secrets. Perhaps it's a particular opinion or preference you carry that you dare not utter in front of your friends or family. Perhaps it's a deed done which brings you the lowest shame. Perhaps it's a criminal activity from which a significant punishment could be incurred. Perhaps it was a traumatizing experience that was outside your control. Regardless of what it is, we all tend to keep something buried six feet under. It is these things that strengthen our roots in duality, therefore it is these things which should be analyzed the most.

By now, I'm sure you've heard the crunchy-granola scriptures like, "look within" and, "inner peace". Well, this is what those fluttery vague things mean. It means actually asking yourself what it is that weighs you down, and questioning why you let it. In order to fix the cultural issues that we're experiencing on a mass scale, we need to first be able to address our ability to open up to each other on an interpersonal level.

What are your secrets, and why are they still there? You may not even necessarily have to tell anyone else about them, although that's usually the best option, but by giving yourself permission to fully explore the emotional content behind your reasoning for maintaining them without self-judgement or denial, the weight you carry on your heart day-to-day can be lessened. Perhaps some of your secrets do indeed need to stay secret, but the size of the bulge they make under the carpet you're sweeping them under can always be diminished. Our secrets are challenges from our soul to us, to ask us to rise above that which we are ashamed of. Usually, to banish the weight of a secret, especially if it is fueled by guilt, some form of action of repentance or admittance is required, and this action clears the ties that bind us to the stress. However, this action tends to be a challenging thing to do that requires the dissolution of pride or self insecurity.

Take stock of your secrets, and eliminate those that you are strong enough to eliminate; if only for your own sake. Through this, we can begin to relate on a more connected level because we allow ourselves to realize that our personal problems don't have to haunt or separate us, and our ability to join in cultural happiness can be strengthened due to our decreased obsession with defining "self" from "not self". When this begins to take place, words like black or white, gay or straight, pro-this or anti-that, republican or democrat, christian or jew or muslim, theorist and sheeple, and all the other terms we use to keep the rest of our species different from us will begin to fade.

Eventually, as our species continues to spread from one area to the next, our cultures will inevitably become so blurry in their differences that nationalism itself will be brought into question as being an invalid concept, and we will simply identify ourselves as the people of Earth: The Garden of Eden of the Milky Way Galaxy.