The Tree of Life: Watering Your Roots 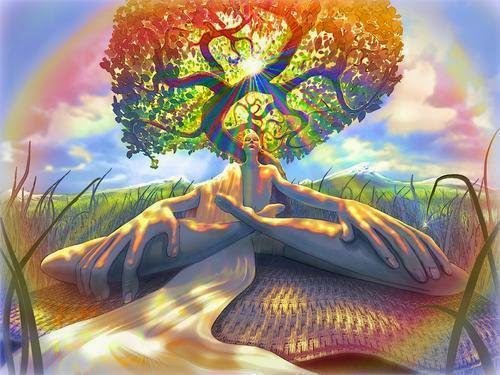 The human body, just like any needy plant in a garden, requires two to three deep waterings, and at least a few hours of direct sunlight per day.

A plant is best watered through generous application directly at the site of the roots. It does the plant no good to have water fall upon its leaves. Animals, whose physical roots extend within themselves rather than within the Earth, have evolved beyond this, and have one singular tube in which water need be deposited; making the process of properly watering a human quite direct and instinctual. When watering a human, ensure that at least a full liter of water is consumed at a time. Like many other plants in your garden, humans do not fair well with trickles of water provided throughout the day. Little sips here and there are wasted on the human due to the nature of how the body uses water in varying scenarios.

To best apply water to the deepest roots of the human organism, the human must drink very deeply. This is best accomplished by watering the human with at least a liter of room-temperature water at a time. Directly upon rising in the morning, when the stomach is empty and the digestive tract is in stasis, the human must be deeply watered. This wakes up the roots of the human, and spurns the removal of wastes built up over a night of digestion. The human is best fed lightly in the morning to facilitate this ongoing removal of bodily wastes from the night before. Ideally, humans are the best at energy synthesis when the sun is at its highest point, meaning that the best time to feed a human while maximizing cellular uptake of nutrients is just shortly after solar noon.

About 30-60 minutes prior to feeding an adult human, ensure that they have been properly watered with another liter or so. This makes sure that the roots of the human have been fully cleansed and are prepared to withstand the onslaught of new foreign material to be converted into "self". A tall glass of water should also be applied to the roots of a human about 30 minutes after a meal as well, to ensure that the molarity of chemical components being diluted remains in an optimal range for proper digestion. Feeding and watering are to be kept as separate activities. Do not water a human directly while it feeds, because this will dilute the stomach acid it uses to break down the invading "not-self" material. Only water a human at least 30 minutes before and after feeding it.

Do not allow your human to graze on food throughout the day. This hurts your human, because every time new foreign matter is introduced to the stomach of a human, all digestive energy goes towards dealing with this new and more influential threat. The new food particles are way more "not-self" than the matter that has already undergone some digestion, and receives a heightened level of attention because of it. If there is already food in the process of being digested in the small intestine, for example, then this food will be left to sit and rot for a time while the new invaders are "nationalized" to the makeup of the body. This is grossly inefficient and produces improper nutrient uptake by your human.

In a nut shell, a human needs to be watered with at least a liter of water immediately in the morning, and around a half-hour prior/post to each complete meal. Giving a human sips of water throughout the day is also encouraged, but is not to be relied upon as the proper watering of the organism. When physical activity is to be executed, it is to be treated somewhat like a meal, just with a more generous post-activity watering than a singular glass of water. Simply drink a liter of water an hour before the activity and another liter (or more) a half-hour after the activity; maintaining a constant flow of hydration throughout the activity as well.

Eventually, when the human finally reaches its maximum hydration potential, the amount of food required to feed it can be reduced significantly due to the highly-mobile aqueous nature of their structure.

live.in.freedom
Posted by Unknown at 7:45 AM